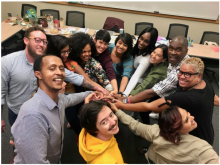 Local, survivor-led anti-violence organization Collective Justice believes that we should be bold in our imagination about the communities we would like to create.

Collective Justice originated as an extension of the work LSJ Professor Katherine Beckett and Kartman were involved in for the UWCHR and LSJ’s “Rethinking Punishment” project, an initiative working to share stories of redemption of people serving long prison sentences in an effort to push for meaningful reform within our legal system.

While working with various prison-led organizations at the Washington State Reformatory, Beckett and Kartman identified a need for more long-term restorative justice programming within the institution, and decided to start their own organization. After collecting information from the Inside Prison Project in California, Beckett and Kartman came back to Seattle and crafted a curriculum. Thus, Collective Justice was born.

Since then, Collective Justice has been serving the King County and Pierce County regions, hosting a multitude of programs built upon restorative and transformative justice principles.

Such programs include Healing Education and Accountability for Liberation (HEAL) Circles for people incarcerated at Washington State Reformatory at Monroe Correctional Complex; Survivor Circles for community members impacted by violence; Dialogue and Accountability Processes for people addressing interpersonal conflict and harm in their communities; and a Heal2Action Leadership Academy to equip survivors to lead policy change and advocate for community-centered approaches to safety and justice.

Devon Adams, Fundraising and Development Coordinator at Collective Justice, got involved with CJ in December of 2017 while incarcerated at the Washington State Reformatory.

Adams says that participating in CJ’s HEAL circles helped him identify values and practices that he wanted to incorporate into his everyday life, such as self-care, restorative justice, transformative justice, and accountability.

“Martina and the rest of CJ provided me with a tremendous amount of support, as someone who spent 20 years in prison. It's been a rough transition mentally, trying to adjust,” Adams said.

Adams was additionally involved in Direct Dialogues, dialogue accountability processes that bring together those who experienced the harm and those who had caused the harm.

“Meeting with survivors and people who had experienced harm was definitely impactful. Allowing space for both sides to share their experiences allowed each party to be heard, and in being heard, see the humanity in one another,” Adams said.

Lupe Vidaurri, a 2009 LSJ alum and HEAL Circle Facilitator at Collective Justice, explains the ways in which their organization’s “anti-violence” framework encompasses not just interpersonal violence, but also state and institutional violence.

“We are an anti-violence organization. When you think about that, it's not just violence in the community but the carceral violence that exists today,” Vidaurri said. “We’re very much an abolitionist organization; in the future, we are hoping for the abolishment of all institutions that cause and perpetuate harm to the folks in our communities, particularly Black, brown, and indigenous folks who are pulled out and put into these carceral settings.”

In alignment with this framework, Collective Justice’s HEAL circles not only discuss accountability and healing on an individual level, but also break down the ways in which oppression and intergenerational violence create circumstances that compel individuals to commit the harms in which they are incarcerated for.

“Incarcerated folks are survivors too,” Vidaurri expressed. “The harm they’ve caused, they’ve most likely experienced before… We need to question and rethink our perceptions of who is a survivor and who is a person that has experienced harm.”

Vidaurri is hopeful for a future in which violence does not exist.

“In the future, we hope that all types of violence are gone. This may happen when people are resourced and have everything that they need in their communities to be able to support one another, rather than relying on systems to help or harm us,” Vidaurri said.

Adams believes that beginning to build a better world starts with one’s self.

“A lot of people are conditioned to believe that it's not possible [to build a better world]. It's easy to look at the big picture and think, ‘this is really hard’. When you just start with yourself, finding ways to honor the impact that each of us can have, it spreads.” Adams said.

“Learn, get engaged, and do what you can to live a life that reflects your values. If we put our values into practice a little bit better, we might be able to create a world that works for everyone. It doesn’t mean you have to give up anything… We have this scarcity mentality, but, in reality, there is enough for everybody. Enough peace, enough joy, enough love, and enough resources.”