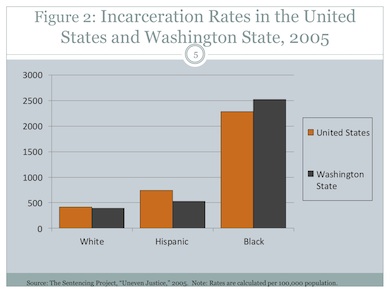 As part of the Task Force on Race and the Criminal Justice System, LSJ Professor Katherine Beckett and Sociology Professor Alexes Harris presented information on March 2 about racial disparities in the criminal justice system to the Washington Supreme Court in Olympia.

The task force was created after public outrage over comments made by former state Supreme Court Justice Richard Sanders and Justice James Johnson that African Americans are overrepresented in the prison population because they commit a disproportionate number of crimes.

“This upset a lot of people because there are a lot of factors that contribute to racial disproportionality,” said Beckett. “The idea was to have people come together and present findings…to show that there are many causes of racial disparities in the criminal justice system.”

The task force was convened by King County Superior Court Judge Steven Gonzalez and Professor Robert Chang, director of the Fred. T Korematsu Center for Law and Equality at Seattle University School of Law. Its aim was to investigate disproportionalities in the criminal justice system and to make recommendations for changes.

The task force handed each of the justices a copy of the “Preliminary Report on Race and Washington’s Criminal Justice System,” an 80-page document compiled by a number of legal professionals, researchers and librarians that documents racial disproportionalities within the criminal justice system.

During the presentations, experts spoke about the historical background and context of racial biases and barriers in our criminal justice system. They also explained how race-neutral practices and policies can lead to racial disproportionality.

“It was important for [the justices] to hear the research findings. What we’ve asked them to think about is that race can matter even if no one is purposely discriminating,” said Beckett.

During her presentation, Harris contrasted the 2005 incarceration rates for the white, Hispanic and black population in the United States with the data for Washington State.

The consensus among scholars at the task force was that the disparate treatment of minority groups was found all across Washington State and at all stages of the criminal justice system.

“There is a clear overrepresentation of people of color in the United States and in the Washington State criminal justice system, namely blacks, Latinos and Native Americans,” said Harris.

Although it is difficult to determine precisely what best explains this overrepresentation, Beckett outlined multiple factors at play. Race can play a role at each stage of the criminal justice process, influencing decisions to arrest, charge and sentence. Seemingly race-neutral factors, such as employment history, residential stability and “reputation,” can influence such decisions.

“The focus on crack cocaine and the market is a facially race-neutral policy [that] is aimed at all crack users and deliverers not people of a particular color but…the decision to deemphasize other drugs including heroin, methamphetamines and other serious drugs not only produced racially disparate outcomes but was difficult to explain public health and safety terms,” said Beckett.

Another factor creating disparities is the existence of implicit and explicit bias in the criminal justice system.

In a recent study focused on judicial decisions about the assessment of fees and fines, Beckett and Harris found, after controlling for legal and demographic factors, that Latino defendants were receiving significantly greater fees and fines than other similarly situated defendants.

After the presentations, the task force had eight recommendations, including that the court commit to a series of forums on specific issues related to race in the criminal justice system, such as about juvenile justice, re-entry into society, and legal financial obligations.

The task force strongly encouraged the court to exercise leadership in the public dialogue on race within our justice system by creating or empowering an entity to address these concerns publicly.

“The consequences of these racial disparities are profound because once people are criminally convicted, it makes it difficult for them to get their life together,” said Beckett. “We are also asking [the justices] to take a leadership role in addressing some of these problems.”

Beckett explained that besides the difficulty of finding a job with a criminal record, people also have a harder time with housing and can face tax restraints, which often makes it even more challenging for them to get back on their feet.

The task force recommended that the justices support the expansion of alternative sentencing policies other than incarceration, and participate in a serious dialogue regarding the status of felons after they are released from prison and the obstacles that they face trying to re-enter into society.

The presentation was the first time that the justices have participated in a round table discussion. Beckett said that two justices told her that they were convinced and realized that the problem was more complex than they had realized.

“The task force plans to keep working on the project because it’s an ongoing process,” said Beckett. “It will be active for many years to come.”

For more information about the task force and the Korematsu Center, please visit their website.