Policing of Immigration: Ellensburg and Beyond 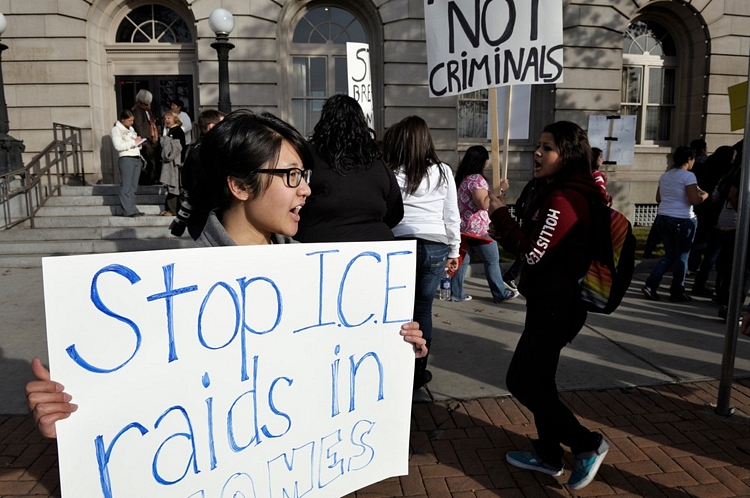 Image of Rev. Shalom Agtarap by Paul Jeffrey of Kairosphotos

The Reverend Shalom Agtarap, an alumnus of the Law, Societies, and Justice program along with Professor Katherine Beckett and Ph.D. student Ben Gonzalez spoke to students at the “Policing of Immigration: Ellensburg and Beyond” event about the impacts of politics and policies on a small community like Ellensburg.

“ICE agents went in looking for ‘criminal persons’ giving the impression that everyone apprehended was a hardened criminal or at the very least that the home invasions were justified,” said Agtarap. “What they failed to mention is that they’ve never been convicted of anything before and it’s the possession of false documents that makes them criminals now.”

Agtarap, pastor of the First United Methodist Church in Ellensburg, said that the church quickly became a place for people organizing to help affected families. It also emerged as a safe place where people could come together after the situation.

“Folks don’t understand that unreasonable searches like these can happen to them,” said Agtarap. “[But they happen] even if they’re minding their own business or even if they’re new moms.”

Professor Beckett noted the relationship between the events in Ellensburg and the national context of law enforcement and immigration policies in the United States.

“What happened in Ellensburg is an expression of a much larger shift in immigration enforcement practices and priorities,” said Beckett. “The shift was legitimated in terms of national security [and] as an anti-crime, anti-terrorism policy. The problem that creates is that the people caught up in the raids are neither fugitives nor criminals.”

Of the 30 people that were arrested in Ellensburg, 12 were young mothers and some of their children were left without any wage earners in the home.

Beckett discussed the incentives for ICE and other law enforcement agencies to create new criminal charges, which were previously considered administrative immigration violations in search of legitimizing their policy.

“That in turn is part of the larger trend where the criminal law and the administrative law are being blurred,” said Beckett.

Beckett spoke about creation of the National Fugitive Operations Program (NFOP), which is a program within ICE responsible for conducting home and workplace raids.

“The main rationale for doing this was for national security and [the program] was intended to go after dangerous fugitives,” said Beckett. “However, most undocumented immigrants are neither fugitives nor criminals so they ended up making up a lot of arrests but very few of those they were arresting fit the category which they were mandated to meet.”

“The need to justify this massive expenditure of time and resources has created an institutional problem for ICE,” said Beckett. “One response to that is to create these criminal charges and that in turn raises a lot of questions about due process, criminal process and these fused administrative and criminal processes.”

Beckett explained that the charges of visa fraud and government identification fraud which 13 of those arrested in Ellensburg were charged with has historically not been treated as a serious criminal offense.

According to an ICE press release, three of those have the additional charge of false claim to U.S. citizenship and one has also been charged with re-entry into the United States after deportation.

Gonzalez, another member of the panel, discussed how the national discourse has shifted towards a criminalization of undocumented immigrants who are largely coming to the United States to work and are largely not breaking any laws.

“One of the problems with ICE enforcement is that people that are here illegally are afraid to call the cops,” said Gonzalez.

Gonzalez explained that while there are fewer immigrants coming to the United States as a result of the job shortage caused by the recession, the hysteria around undocumented immigration has risen.

“The number of undocumented immigrants residing in the United States has fallen from a high of 12 million in 2007 to 11.2 million now,” said Gonzalez. “At the same time, ICE raids have increased every single year.”

Gonzalez also said that there is a split about how Americans feel about illegal immigration because while Republicans, Independents and Democrats are all much more likely to favor either a path to citizenship or a guest worker program, there is also a desire for local enforcement to actually enforce federal immigration laws.

“Americans might see them as hardworking and don’t want deportation but at the same time they want the law enforced,” said Gonzalez.

Agtarap believes that a comprehensive approach that would protect the rights of workers, reunify families separated by the deportation process and extend legal protections for documented and undocumented workers is needed.

“There is a need for a path to citizenship because currently, one does not exist for those who are in this country without documents or those who were very young when they came,” said Agtarap. “One thing is for sure, enforcement-only actions by ICE do not solve anything.”

LSJ senior Micah Babinski said that he thought the event was informative because all three of the panel guests “brought a unique perspective and it was particularly effective because they presented the theoretical view without devaluing the personal aspects of immigration policies.”

Babinski also said that he enjoyed hearing from people who were involved and touched by these issues and believed that the panel was an effective way to raise awareness about the raids that happened in Ellensburg and the larger consequences surrounding illegal immigration.

“Our commitment to education around immigration continues,” said Agtarap. “We’ll have more success in changing attitudes about immigration if we provide opportunities for connection to personal stories.”