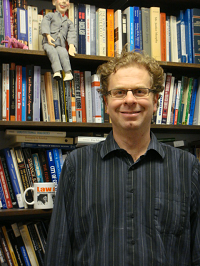 It was ten years in the making, but LSJ Professor George Lovell’s new book, This is Not Civil Rights, which focuses on the language of rights, law and constitutionalism, will appear late summer or early fall of 2012.

The book is a study of how ordinary people make claims that are related to rights. It is based on letters that people wrote to the federal government from the period of 1939-1941 and the replies that the federal government made to those letters. The letters were classified as being about civil rights and civil liberties.

Professor Lovell said that he found the letters at the National Archives in Washington D.C. when he was doing research on another book.

“The letters became so interesting that I never wrote the book I intended and it became a book about the letters, which is a very different sort of book,” said Lovell. “As far as I know, I’m the first one who’s written anything about these letters or at least, I hope I’m the first one.”

The letters that Professor Lovell found are focused on a variety of different topics but many are related to allegations of race-based police brutality and perceived miscarriages of justice. In addition, several were centered on property rights, and others on economic opportunity and economic justice.

“Some of the letters are very moving, some of the letters will say that I’m not a perfect person, I’ve committed crimes but I did not do this crime and they framed me for it and I’m rotting in prison and I have no way to get out,” said Lovell. “Those letters you can be very sympathetic towards, but then there are letters which are what you would think of as whiny constituents like the ones that complain the government is widening my sidewalk.”

Professor Lovell said that although he was drawn to the letters, it took him a long time to write the book because he wasn’t sure what story to tell.

“I’ve been living with these stories for almost 10 years and I’ve worked on this book for a really long time. I think the reason it took me so long to write the book is because I resisted what the letters were trying to tell me,” said Lovell. “But ultimately I learned a lot from the letters and the people who wrote them. I think that’s why I think their stories are worth telling to, because I think you can learn a lot from them.”

In the book, Lovell examines the American tendency to frame issues in legal language and to assert their interests in terms of individual rights.

He also notes that past scholars have been quite critical of this type of language because they believe that people who make constitutional claims do not quite understand their rights and this reinforces an inaccurate and ideologically charged account of legal processes and governance.

However, Professor Lovell does not believe this and instead uses the letters to show how ordinary people were able to use the language of law to make demands and that they did understand the law’s limitations.

He found that many of the people who wrote to the Department of Justice or the White House were complaining about rights even before the civil rights movement. In fact, people were using the legal discourses to express aspirations for a better legal order.

“What I find is that the people would often in their letters quote constitutional texts and they had clearly read the Constitution looking for parts that would help them,” said Lovell. “What it shows is that people were not confused but that they had their own vision of the Constitution partly based on their ideas about constitutional values and what the Constitution actually said. To the extent that judges said something different, they were willing to say that the judges were wrong.”

However, Professor Lovell noted that during this time period, there was very little that the federal government could do to help people because there were no federal civil rights law at that time and they had a narrow capacity to help people if their rights were violated by the state government.

Professor Lovell said that out of 1,100 of these letters in his sample, only three or four of the people actually got help and everyone else was told that the federal government could not help them.

“What surprised me isn’t that the federal government wouldn’t help but the puzzle is why did so many people write in and use this language of rights when there really wasn’t any federal laws that to help them,” said Lovell. “You could say that they were confused or you could see it as a way that they were trying to show that these laws should exist.”

Professor Lovell said that even though the letters did not reach a larger audience, he still feels that the stories in them are important.

“I think these were voices that were buried and they were buried in an archive. By any standard, these voices were insignificant; these are voices that didn’t become important people. They didn’t lead movements. They didn’t directly produce any kind of change but they are really powerful and many of them are very moving so people should listen.”