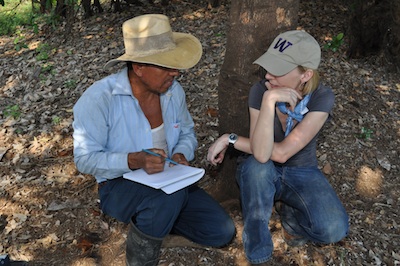 LSJ Professor Angelina Godoy was selected as one of the eleven women who were honored by the Women’s Center at the “Women of Courage: Inspiring a New World” gala event on Oct. 22.

“We highlighted the amazing work of women in Washington State and we honored women who have shifted the paradigm in our community and abroad,” said Alexandra Eckstein, the Advancement and Events coordinator at the UW Women’s Center. “These women are forging new paths for people and inspiring others to follow.”

Eckstein said that it was important to highlight the human rights work that Professor Godoy is doing both in the local community and abroad.

“She’s making a tremendous impact abroad and her work is not only meaningful and making an impact in Latin America but she truly is inspiring people locally to get involved in her work,” said Eckstein. “So it was an easy pick for us, and we are excited to be highlighting her as one of the Women of Courage.”

In addition to teaching undergraduate and graduate courses in human rights in both LSJ and the Jackson School of International Studies, Professor Godoy also serves as the founding director of the UW Center for Human Rights.

“I’m interested in trying to understand human rights through conversations with people on the frontlines of human rights struggles because we can have an idea of human rights through what we read in books or in international treaties but I’m particularly interested in what they mean in people’s real lives,” said Godoy. “So I think the only way to learn that is by going to the places where people are struggling for their rights and trying to understand their perspective and learn from them.”

Mariana Llamas-Cendon, the marketing coordinator at the Women’s Center said that one of the goals of their event was to let the community know about the work that the women are doing as well as the programs and services that are offered at the center.

“It was a way to let the community know that they have all this wealth of experience of hardworking professional women that are trying to do something good for the community,” said Llamas-Cendon. “These women have the power and the courage to change the lives of a lot of people in their own fields.”

Llamas-Cendon said that the eleven women were chosen because of their social justice, education and community service work as well as their commitment to working for the community to make it a better place.

“[These women] took a stand and not a lot of people have that courage to take a stand and work toward that kind of change,” said Llamas-Cendon. “Angelina is a role model because she’s an example that as a woman, you can do it and you can educate others and help empower change.”

As the director for the UW Center for Human Rights, Godoy is also working on projects about environmental justice and rights to water in Guatemala and historical memories in El Salvador.

Godoy said that it was nice to see that people appreciated her work. However, she believes that more work needs to be done.

“To me, it’s both an honor and a challenge because now that we have a Center for Human Rights, there will be more opportunities for people to engage in human rights and do innovative and cutting edge human rights work,” said Godoy. “The challenge is that we are still very small and there’s so much need for human rights work and we are not always able to achieve as much as I would like.”

In 2010, Professor Godoy taught an intensive, research-based course on biofuels and human rights where she took a group of eleven undergraduate and graduate students to Guatemala for a case study of human rights issues in the production of cane-based ethanol and diesel from African palm.

“All of her work abroad is truly inspirational and having the courage to actually go there and get her hands on, not a lot of people do that,” said Llamas-Cendon. “I think she was chosen because she’s really concerned about equality and empowering people who can’t defend themselves.”

LSJ Alumnus Martina Kartman traveled to Guatemala twice with Professor Godoy, first in the summer of 2007 on a Human Rights study abroad and also, in winter 2008 as part of a Responsible Apparel Purchasing Task Force.

“When I went with Professor Godoy to Guatemala, I had the unique opportunity to connect what I’d learned in the classroom to on the ground realities. I had the opportunity to hear the stories of victims of governmental violence, factory laborers, as well as community advocates and human rights workers. Often grappling with and understanding the complexity of the injustices felt overwhelming,” said Kartman. “However, instead of being defeated or paralyzed by it, Godoy’s willingness to take on difficult human rights cases encouraged us to do the same. Her passion and dedication to human rights work inspired us to utilize the collective power we held as students to effect real change.”

Kartman also said that the trips left her with a deeper understanding of global issues from an academic as well as human perspective.

“I am grateful to her for the example she set for us as a leader and courageous human rights advocate,” said Kartman.