A Discussion about the Causes and Consequences of Torture During the War on Terror, Nov. 18 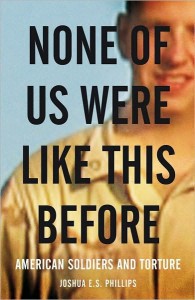 Joshua Phillips, the author of the book None of Us Were Like This Before: American Soldiers and Torture (Verso, 2010) will speak on Friday, November 18, in Thomson 317 at 3:30 p.m.

Joshua E. S. Phillips has reported from Southeast Asia, the Middle East, and South Asia. His work has appeared in the Washington Post, Newsweek, The Nation, Salon, the San Francisco Chronicle, and the Atlanta Journal-Constitution, among other publications. His radio features have been broadcast on NPR and the BBC. Phillips won a Heywood Broun Award and Alfred I. duPont-Columbia University Award for excellence in broadcast journalism for his American Radio Works documentary What Killed Sergeant Gray.

The event is sponsored by the Law, Societies, and Justice program, the Center for Human Rights, the Washington State Religious Campaign Against Torture, and the Western Washington Fellowship of Reconciliation.