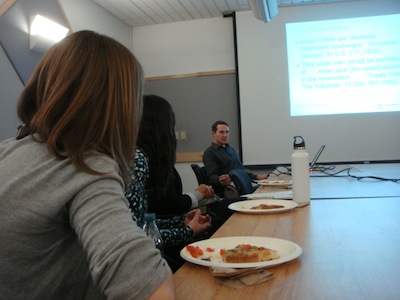 Local attorney and LSJ alum Ryan Dreveskracht spoke at the luncheon forum, “Policing on Indian Reservations,” on Dec. 6 about the high crime rate on Indian reservations, the difficulties tribes face trying to manage crime on their own land and the advantages of getting a specialized degree.

According to the Justice Department, murder rates are 10 times higher than the national average for Native women. Further, one-third of all American Indian women will be raped in their lifetime and nearly three of five have been assaulted by their partner.

Despite these epidemic rates of crimes, the federal government allocated nine officers to patrol the 2.3 million-acre Standing Rock Reservation in 2008. At some times, only one officer was on duty.

“There’s a sense that you aren’t going to get caught so there’s no reason for the perpetrators to hold back because the police can’t do anything about it because of a lack of jurisdiction,” Dreveskracht said.

During the luncheon, he spoke about the cause of the current state of Native America and the jurisdictional law-enforcement gap that exists in Indian Country. He also explained what federal and state governments can do to change the tide, and why it is not getting done.

Alyssa Broenneke, a senior studying LSJ with a minor in Spanish who attended the event, said that it was good to see his perspective because it is not a well-known subject.

“The sheer amount of violence stood out to me and how nothing is being done about it,” said Broenneke. “It was shocking to learn about how severe it was because you’d assume that if you knew how shocking it was, there would be more discourse about it.”

Dreveskracht graduated from the University of Washington in 2005 and now works as an associate at Galanda Broadman PLLC in Seattle where he focuses on representing businesses and tribal governments in public affairs, energy, gaming, taxation and general economic development.

“People who commit violent crimes are able to continue doing so because a lot of the time people who come on the reservation commit crimes and are not caught,” Dreveskracht said.

Even though the federal police have the power to prosecute criminals, crimes on Indian reservations are often seen as a low priority and there is not enough manpower to properly enforce the area.

“The federal police can do something but sometimes there are only one or two cops in an area that is the size of Rhode Island so they physically can’t cover the area,” he said.

Dreveskracht spoke about the Indian Country Crimes Act of 1885 and the Tribal Law and Order Act of 2010, which have changed the relationships between U.S. and tribal lands.

The Indian Country Crimes Act that mandated federal jurisdiction for seven major crimes such as murder, kidnapping and manslaughter, and therefore reduced the ability of tribal police to punish serious offenders in Indian country.

The Indian Civil Rights Act mandated that tribes could impose sentences no more severe than one year in jail and a $5000 fine.

Dreveskracht spoke about the difficulty for tribal police to prosecute crimes as a result of the broken jurisdictional system and the problems of funding.

He said that up to 80 percent of crimes are committed by non-Indians and the tribal police cannot do anything about it.

“It’s not only Indians who live on reservations, and when you grow up knowing that the police don’t have jurisdiction and that crimes are never prosecuted,” said Dreveskracht. “A lot of people who commit cribes on tribes are repeat offenders and know that they can do it again.”

“Although tribal police are an integral part of tribal governments, often working proactively with their communities to reduce harm on the Reservation and rendering assistance to non native law enforcement, their jurisdiction has effectively been limited to smaller and petty crimes,” Dreveskracht said. “The underlying issue is that tribal police can’t do what they need to do to stop crime.”

Dreveskracht said that he believes that the solution is to give the jurisdiction back to the tribe.

“I would like to see jurisdiction given back to the tribes. There’s no reason that tribes shouldn’t have the right to punish somebody,” Dreveskracht said. “The tribal police know what’s going on and they have more reason to convict because it is happening in their community.”

Dreveskracht said that he was passionate about American Tribal Law because he felt that it was an area that he could really make an impact in.

“It’s an upward battle, there’s more than 80 percent unemployed, high rates of crime and poverty that’s out of control. I feel like I have an obligation to change the situation,” he said.

Dreveskracht said that LSJ has changed the way he looks at situations.

“I felt that the LSJ program allowed me to look at injustices in the system as opposed to the individuals and that helps me in my field because that’s what I do,” Dreveskracht said. “Specifically in Indian law, I often don’t look at how specific people are harmed but how tribal sovereignty has been eroded and how that has led to the situation we are in today; where tribes are unable to manage their own land.”

Dreveskracht said that it was important for students to go to law school for the right reasons.

“LSJ opened my eyes to a lot of injustice that goes on within the system and I wanted to do something about it so that’s why I ended up going to law school,” Dreveskracht said. “A lot of people go to law school because they don’t know what to do and those people end up being miserable attorneys…but if you have an underlying goal to fix something or to help people out, then I wouldn’t discourage you.”

Brittany Ward, a senior studying LSJ and Political Science, said that she thought the talk was very informative.

“It’s great to know that someone who went through the program is doing something successful with their life and using what they learned as an undergrad and applying some of the same lessons to their careers,” Ward said.

Dreveskracht spoke about how getting a specialized degree can be helpful especially in a challenging job market.

“If you specialize in something where they need you, you are going to find your niche,” Dreveskracht said. “If you’re more specialized and a firm needs someone in that area, you have a step above everyone else, you’re knowledgeable in your field and that stands out to employers.”

He said that the network opportunity of specializing in a niche market is an advantage.

Professor Steve Herbert, the director of LSJ and a former teacher of Dreveskracht’s, said it was wonderful to seeing an alumnus doing so well. “It was nice to see an alum doing valuable work that he really enjoys,” Herbert said. I thought that was inspirational for the students that were in attendance.”