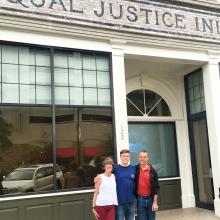 Bryce Ellis stands in front of the Equal Justice Initiative in Montgomery, Alabama, with his parents, Patty Bicknell and Bob Ellis (photo courtsey of Bryce Ellis)

It took Bryce Ellis and his mother three and a half days to travel from Seattle to Montgomery, Alabama.  That arduous journey proved well worth it.

Ellis went to Montgomery to intern at the Equal Justice Initiative (EJI), a nonprofit organization that provides legal representation to defendants and prisoners of marginalized backgrounds.

The EJI works toward reform in the criminal justice system, particularly in the areas of race and poverty, child imprisonment, the death penalty and mass incarceration.  Its founder, Bryan Stevenson, is the author of the acclaimed memoir, Just Mercy.

As a communications intern, Ellis, who will soon complete a double major in LSJ and Communication, summarized and reviewed the overwhelming number of media requests received by the EJI.

But Ellis was most excited about the organization’s legal work. He made several prison visits and interacted with potential clients. He also did some research for EJI projects.

Ellis said applying for this internship was intense. During winter quarter, he went through a two-and-a-half-hour interview process in Montgomery, completing at least four consecutive interviews.

“They seemed to be curious about why I was interested in their work, about what I thought about mass incarceration and where I saw myself within mass incarceration work,” Ellis said. “That’s an easy question to answer having been in LSJ.”

In 2014, Ellis took Professor Steve Herbert’s mixed enrollment class, a 400-level seminar taught at the Washington State Reformatory in Monroe. About half of the students were LSJ students like Ellis. The other students were inmates involved in the University Beyond Bars program.

Ellis, who transferred to the UW from Seattle Central Community College, credits his LSJ professors for shaping his perspective on criminal justice.

“When I came to the UW, I just made it a priority to try my darndest to engage with professors after class,” he said.

“In that class, it was about humanizing these issues that so often we confront with statistics and pushing it to that next level of thought and consideration,” Ellis said.

He also took Professor Katherine Beckett’s 2014-15 group honors thesis class on life without parole. That experience, Ellis said, introduced him to an area of criminal justice where he would like to have an impact.

Ellis said that spending his four-month internship in the South opened his eyes to a new perspective on race and privilege. It also contextualized his understanding of racial dynamics in Seattle.

“This idea of race separated by railroad tracks was really prominent in the South in that you could see these physical divides in the community,” he said.

But Seattle isn’t so different.

“We have similar racial divides that aren’t so clearly defined but that are very much there,” Ellis said.

After graduating, Ellis will move to Indiana to work for the Theta Chi Fraternity’s international headquarters. He also plans to apply to law school within the next few years.

Because of his experience with EJI, Ellis is considering a career as a public defender.

“The possibility of not just pleading out but actually arguing cases and representing the poor and marginalized who find themselves disproportionately impacted by the criminal justice system is really, really appealing to me,” Ellis said. “There is so much opportunity for change.”