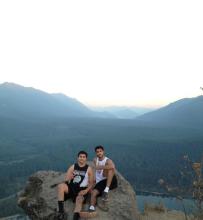 Students take diverse paths both into and out of Law, Societies, and Justice.  Take, for example, the cases of the Soni brothers, Peyush and Ayush.

Peyush, the elder of the two, was born in Punjab, India, but moved at the age of three to the Puget Sound region, where Ayush was born one year later.  Their early years meant moves to several communities, including West Seattle, Renton, and Des Moines, before they finally settled in Kent for an extended time.

Both became intrigued by issues of justice when they took courses through the Running Start Program at Highline Community College.  That was enough to hook Peyush.

“I knew I wanted to explore more classes related to the justice system,” he said. “So, I took LSJ 200 my first quarter at UW. I was very intrigued by the content and decided to take further LSJ classes, ultimately majoring in LSJ.”

His interest in justice issues has motivated his work life since he graduated in 2014.  He currently works at the law office of Zuckerman & Zimmerman as a legislative assistant and paralegal.  The firm focuses much of its work on clemency cases for incarcerated individuals.  Through his work, he has come to appreciate LSJ’s insistence on seeing the social world in other than black-and-white terms.

“Somebody could be guilty of some grotesque crime, but you also have to take into account that 20 years have passed in a correctional facility,” Peyush said. “I believe in change. We have this thing called the Constitution that protects their rights, even if they’re convicted of something. It really irks me when those rights are trying to be taken away.”

Such rights include voting, and access to such services and resources as social security, medical care, and housing. These rights are often eroded, Peyush said, because “There’s this very negative rhetoric, this sense of ‘once a criminal always a criminal’ ideology.”

Peyush himself is most interested in how rights are implemented, practiced, and made available. This meant that although he wanted a job quickly after graduation, he was picky about what one he would take. He ended up choosing Zuckerman & Zimmerman because he wanted a job that had real impact in life.

From his perspective, Peyush strongly endorses LSJ’s involvement in mixed-enrollment courses, and other efforts to spur prisoner education.

“We call it a rehabilitative system,” he said. “It should allow [prisoners] to learn and grow.”

An even larger component of prison education, he said, is that it allows those prisoners to make progress back into society. He stated that prisons that have these types of opportunities also have low recidivism rates.

Although Ayush also got hooked on justice issues as a Running Start student at Highline, his career trajectory appears headed in a different direction.  This is evident by his unusual double major -- LSJ and Informatics.

“Sometimes the law doesn’t really work for individuals who want those rights to intellectual property,” Ayush said. “Right now, I would consider Seattle to be going through a tech boom with all of these innovative ideas coming out.”

He said patents fall under a broad category, as do trademarks and trade secrets. It is not always easy to classify the ownership of any particular idea, and hence legal contests over patents will remain numerous and consequential.

Although their interests have diverged somewhat, each seriously contemplates law school.  Once he graduates, Ayush hopes to take a gap year or two, and then ultimately apply to a law school. Peyush also plans to go to law school but is currently putting that on hold to try different routes in the job market.

Each of them, however, credits their experience in LSJ for shaping their futures and putting them on certain paths to success and service.

“I’ve thoroughly enjoyed taking all of my LSJ classes,” Ayush said, “and I definitely grew as an individual, academically and professionally.

This article was reported by Kelsey Hamlin.