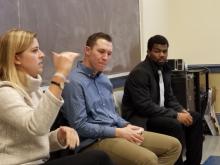 What does it mean to be incarcerated in America?

To better address this question, LSJ debuted a new class this fall, entitled “The Experience of Incarceration.” Taught by Professor Steve Herbert, the class aimed to study the daily lives of the millions of individuals currently behind bars, and to understand the various factors that structure their experience.

These activities allowed students to go beyond readings to personally interact with and learn from incarcerated individuals.

“The problem of mass incarceration seems like a distant issue until you sit down and talk with someone who has gone through the system, and this class provided that opportunity,” said senior Jon Schaeffer.

The seminar enabled students to interact with individuals involved in the prison system through in-class visits and panels. The class hosted such formerly incarcerated individuals as Dolphy Jordan, Spencer Oberg, and Michael Darrington, all of whom discussed their experiences.

To conclude the course, Professor Herbert re-invited Darrington, alongside LSJ alums Kelsey Engstrom and Michael Lauritzen, to discuss their ideas for prison reform. Given their unique experiences, each of them had different ideas about the changes they most wanted to see in the prison system.

Darrington, who was incarcerated for almost 8 years at Monroe Correctional Complex and was released in October, emphasized giving humanity back to prisoners.

“I want to see the freedom to move around. To have human contact, shake a hand, give a hug,” Darrington said.

Lauritzen (LSJ class of 2014) is currently a Community Corrections Officer for the Washington Department of Corrections, and works to support men in work release.  He argued that improved training for correctional officers was a key to better prisons. To fight the adversarial attitude between many guards and prisoners, Lauritzen saw increased de-escalation training and more open lines of communication as crucial.

Lauritzen’s perspective – and his career choice -- was influenced by his experience as a member of the first mixed “mixed enrollment” class while an LSJ major.  This course enables LSJ students to attend a class alongside incarcerated students at the Washington State Reformatory.

“Through the mixed enrollment class, I got a new perspective on what transition can look like and how hard it really is,” Lauritzen said. “That’s what really drove me to my current position.”

Engstrom (Class of 2014), previously a Rehabilitation Analyst for the California Department of Corrections and now a staff member of the Justice Involved Solutions Unit at South Seattle Community College, discussed the significance of rehabilitative programming.

Still, all three agreed on the importance of changing the culture of prisons, from shifting the language used to describe incarcerated individuals to training correctional officers as social workers. To make these changes, the panelists provided students with ways to get involved and suggestions on how convince legislators to reform prison.

“It takes individual stories to make a difference,” Engrstrom said. “I think young people getting involved and helping share these stories will really help change the culture.”

This advice resonated with many students in the class, who were grateful for the opportunity to learn about the experience of incarceration, and what they could do to make a difference directly from individuals in the field.

“This class was definitely one of the best classes I have taken at UW because of its focused and intimate format,” said LSJ senior Iris Wagner. “Bringing in speakers who have first hand experience with incarceration or incarcerated people was helpful in that it contextualized the dense topics and concepts we were reading about or discussing in class. While the readings and discussions were important, being able to situate the concepts in the context of those who live within them every day was invaluable.”