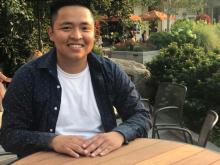 Guillermo is a senior at UW double majoring in Law, Societies, and Justice and Political Science. As an undocumented student, Guillermo has always been passionate about issues that impact his community. Throughout his time at UW, he has worked on several campaigns for undocumented youth as a field organizer for the Washington Dream Coalition (WDC) and has also been an active member of numerous community organizations including the UW Center for Human Rights, SEIU 1199 Labor Union, and the Washington State Labor Council.

I spent some time recently talking with Guillermo about his path to UW, his experiences as an undocumented student, his thoughts about LSJ, and his plans for the future. Highlights from our conversation are below.

Tell me about your path to higher education and to UW.

I was born in Mexico. My family moved to the US when I was 8 because we wanted a better life. I’ve lived in Washington since then and graduated from a Washington high school. When I was in high school, I remember that my mom would always say, “You need to go to college,” but at the time, she didn’t fully know what that meant and I didn’t know what that meant. So I think it took a lot of self-advocacy to get this process started.

The summer after I graduated, I applied for the Deferred Action for Childhood Arrivals (DACA) program. It took us almost a year to gather all the documents but I got it about a week before I started community college. That allowed me to work when I started school so I could pay for it. It was tough working full time and going to school, but my mother was always there, my grandmother was always there. It was always a team effort. Sometime along the way, I realized that I needed to leave home and delve into what it means to be an adult and I moved to Seattle for my second year in college. I got involved with groups like the Washington Dream Coalition and SEIU 1199 and learned that issues I was faced with were much bigger than just me. That’s what really got me started on this journey.

What drew you to major in LSJ?

In political science, I learned about institutions and political theory, but not so much about how that affects people. But I think what LSJ provided me was the ability to look at an issue from people’s point of view and ask questions like: How do you organize with each other? How do you mobilize communities? Who are some key people that are working on this issue? What methods have been effective? LSJ really comes at a problem from an angle of “We understand that this is a problem, but we want to know how many people this problem affects and how it affects them.” I think that’s a perspective that a lot of other departments don’t take.

LSJ also allowed me to delve more of the academic side of things. I already knew what it meant to do first-hand advocacy since I had been on the picket lines since I was about 19, but reading and learning about it gave me both sides of the picture and set me up for a successful path at the UW.

How has LSJ impacted your experience of being undocumented?

For a long time, I witnessed a lot of things happening growing up, but I was never able to put a name on it. When I started taking classes in LSJ, they were talking about mass incarceration, implicit biases, institutional violence and barriers, and racism, all of these core concepts of understanding oppression and marginalization. LSJ allowed me to put a name on these issues so I could start to recognize them in my community and gave me the language to discuss them.

LSJ additionally provided with me a lot of support, both from faculty and advisers. I could always go over and talk to the advisers and speak with them about my classes or any problems I was facing. They were very knowledgeable and always willing to listen. If I had pursued a major other than LSJ, I don’t think I would’ve had that kind of support.

When and how did you decide to be so open about your legal status?

When spending time with the WDC, we realized that if we wanted to build power, we needed to own our identity. And part of owning our identity meant embracing every part of who we are. We are all very talented individuals and we wanted to say that our legal status will not define us, but rather serve as a motivation to pursue bigger and better things. Understanding that it was more of a long term fight and that we were going to be there for each other is what really motivated me to make sure that I came to terms with my identity. Also, because I’m very open about it, I know that if at any moment, anything happens to me, my friends at the WDC will immediately start a campaign and be on the ground fighting for me.

How has your experience of being undocumented changed under the current administration?

When the current administration took office, it was very hard for me. I had never dropped a course, but that was the first time when I had to take a step back for my mental health. I’m so thankful for my support network, because I know that we can vent to each other but we also take steps to move forward. The best way to battle what’s going on is to get engage politically and so that’s what I’ve done, most notably working to flip the Burien City Council as a campaign manager for candidate Pedro Ogluin. There’s a lot of value in engaging in opportunities like that because change starts locally and builds up.

What advice do you have for other LSJ students?

I think a lot of what we do here at UW is write a 10 page paper on how we would solve an issue. But really, it’s about making sure you’re showing up to the picket line or rally and being a good ally and using your privilege. Have conversations with people experiencing oppression and talk about what it means to work together. Live with inclusive values and work differently. I think that’s what I want to share with people in similar situations or people who want to get involved.