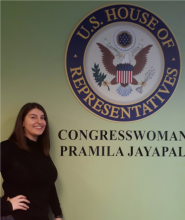 As summer approaches and many Law, Societies, and Justice majors prepare to tackle their internships or newly turned alums begin their search through the job market, there’s one organization that has welcomed LSJ alums and current students with open arms.

Representing Washington’s 7th district, U.S. Congresswoman Pramila Jayapal has a history of advocacy in Seattle. Her office has frequently accepted LSJ students into their fold to learn firsthand about the political process and to acquire the opportunity to apply the skills they’ve learned in the LSJ major.

LSJ alumni Hamdi Mohammed and Nora Hood have even found themselves amongst Jayapal’s full-time staff.

Ironically enough, it was through LSJ’s internship program that Mohammed began her journey to a position in Congresswoman Jayapal’s office.  While an LSJ student, she volunteered for OneAmerica, the largest immigrant and refugee advocacy organization in Washington State, and met Congresswoman Jayapal, who was the Executive Director at the time.  That encounter, plus the education she received in LSJ, has helped make her current work rewarding.

“Law, Societies, and Justice imparted upon me a well-rounded perspective that has proven to be invaluable in my professional pursuits,” Mohammed said. “As someone who came to the United States as a refugee, and as a black Muslim woman, the fight for human rights and the fundamental freedom for all people has always felt personal. For me, LSJ helped enhance my critical thinking skills to become a strong advocate for my community and defend issues that matter to them. I am forever grateful for my LSJ experience and the opportunities it provided me.”

For her part, Hood sees a direct connection between her LSJ coursework and her current job.

"LSJ encouraged me to examine structures of government and power in new ways - to not just see the law as written, but how it impacts people in their everyday lives,” she said. “My LSJ foundation is crucial to the work I do now, and will continue to be relevant for the rest of my career."

Current major Nandina Babic jumped at the chance to join Mohammed and Hood at Congresswoman Jayapal’s office as an intern.

“I remember I saw that there was an email sent out through the LSJ newsletter that there were positions available for interns, and I was so excited,” Babic said.  “I really wanted to bridge the gap between LSJ and Political Science. There was a disconnect between the classroom and real-life experiences, and I really wanted to get a better understanding of how politics operate.”

Neelam Kana, an LSJ and Communications major, also discovered the internship through the weekly newsletter. “I’d been actually following Congresswoman Jayapal’s work for a while before that, so when I saw the newsletter, I knew it was something that I’d like to do,” Kana said.

As interns with Jayapal, Babic and Kana primarily handled constituent communication and services. This involved taking calls, answering questions, and logging comments and concerns, as well as handling casework and directing individuals to outside resources. In their view, the office truly served as a hub for support and advocacy for those in need.

Both students were initially motivated to apply by the LSJ major's internship requirement, and they are each thankful for that impetus.

“I’m really grateful I had the opportunity [to intern with Jayapal],” said Babic. “I think if I wasn’t in LSJ, I wouldn’t have pursued doing something like this. I think that the fact that LSJ requires you to do an internship is the best thing that’s offered in the major. Otherwise, you’ll think ‘well, I don’t need it.’ But I’ve gained a lot of valuable experiences in my time there that I wouldn’t trade for taking another course. This is really learning on the ground, which I think a lot of the internships do; they really force you to consider the real-life application of what you’ve learned.”

Furthermore, Kana and Babic emphasized that their background as LSJ majors prepared them to take on this introductory role in the political process.

“Having that background and knowing what the projects were and their intent was key,” Kana explained. “I knew where they were coming from. A lot of things I learned in my LSJ classes were brought up, I was able to build off that in a real-world setting.”

Babic echoed this sentiment and encouraged other LSJ students to take a risk and get involved in politics or local activism.

“Remember what you’ve learned in LSJ; remember to still question things, don’t take them at face value and look for deeper meaning,” she said.  “Don’t think that you can’t make your own space there. What I mean by that is you might think ‘Oh I’m an intern, and I don’t matter here. What I’m doing isn’t that important, I’m just here for a quarter and it doesn’t matter.’ But it really does matter!  [In] the work we did at least, and in politics in general, you need to recognize that you do take up a space; recognize what that space is, and how you can make change from whatever space you’re in. Don’t be afraid to speak up; in an office, in politics, or in advocacy.”