“The Sanctioned State:” Osanloo’s research digs into sanctions against Iran

The Department of Law, Societies & Justice (LSJ) includes faculty who conduct research on both domestic and international topics. Arzoo Osanloo is one such professor, and has adjunct appointments in the School of Law as well as the Departments of Anthropology, Near Eastern Languages, and Civilization, Gender, Women’s and Sexuality Studies, and Comparative Religion.

Professor Osanloo, who is also the Director of the Jackson School of International Studies’s Middle East Center, has spent a significant amount of time studying the Iranian criminal justice system, which gives victims of intentional homicide the right to ask the state for in-kind retribution or to forgo it.

“I was interested [in this] because I studied law in the United States,” Osanloo said, who also practiced law in the U.S. for almost a decade before turning to academia. “I know that in retributive criminal justice systems, like ours in the U.S., states make the determination about sentencing with little input from the victims’ families. One of the reasons for this is that states want to demonstrate their sovereignty and their authority over the laws. Another reason they sometimes give is that they want to avoid what some believe would be the families of victims’ reactions based on an instinct to seek revenge.”

Upon understanding that over two-thirds of the families of the persons who were harmed by such violence in Iran chose to forgo retribution, Osanloo sought to understand the motivations of people who chose not to demand retribution.

In the course of conducting this research, which she published in Forgiveness Work: Mercy, Law, and Victim’s Rights in Iran, Osanloo was also struck by the impact of U.S. sanctions on everyday life in Iran.

Along the way, Professor Osanloo noticed that these sanctions have been normalized in Iran. Hence, her current project examines how sanctions become a part of the ordinary lives and everyday existence of the citizens of a country. 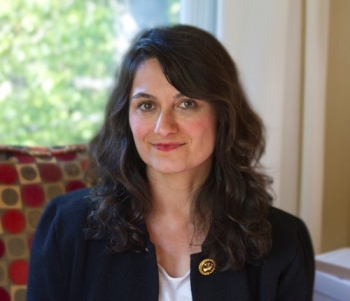 According to Osanloo, the most recent sanctions against Iran are largely unilateral, rather than international, imposed by the United States. The U.S. is an economically powerful country which has given it the capacity to threaten to punish other countries by withdrawing trade agreements if they trade with Iran.

“What was once thought to be a diplomatic tool has now become a punitive one and actually stands apart from any kind of diplomacy,” Osanloo said. “I think that countries like the U.S. have found that sanctions are politically efficacious. Not only do they allow sanctioning countries to avoid costly military responses in favor of less costly economic ones, but also, the violence of the effects of sanctions are far less visible than those of all out war.”

“The problem is [that] it is very hard to prove causation,” Osanloo said. “There are so many ways in which sanctions on Iran offer plausible denial to the sanctioning parties. Such countries can say it is not because of the sanctions that Iranians are suffering, but that the leaders are not running the country as they should.”

Working on international research projects like these comes with its challenges. While one of the primary obstacles is accessibility; the availability of information can also be a problem.

Osanloo mentioned the Iranian government’s suspicions of international researchers. Moreover, she discussed how sanctions affect researchers like herself by making it difficult to go to Iran.

In addition to conducting international research, Professor Osanloo has also developed courses that explore justice on an international scale. Her courses examine both international and U.S. laws in a comparative context and incorporate other countries as well.

“My gateway course in LSJ is “International Human Rights Law in Culture and Practice,” Osanloo said. “I see all my courses as building on each other and this one is the first in the series.”

Currently, Professor Osanloo is teaching a course on “U.S. Asylum and Refugee Law” which explores forced migration. She has also developed a course on sanctions, which she taught for the first time in Spring 2021 and which she will teach again this Spring (2022). She hopes to convert this course into a permanent senior seminar in the near future.

Students interested in addressing international concerns have many opportunities in LSJ, such as getting mentorship from faculty who oversee international projects, internship programs, and more.

“International work, in my opinion, extends to working domestically,” Osanloo said. “Something that I do through my Middle East Center is educate and train both students and the public, so there is a domestic aspect of international work.”