Senior Nick Scott is currently studying LSJ, he hopes to attend the UW School of Law where he will study family law.

Senior Nicholas Scott says there is just one similarity between ballet and academia, his two worlds.

“Right before a test, the butterflies, the nausea, it’s the same as before a performance,” Scott said. “With dance you know exactly what you are supposed to do and when you are supposed to do it.  The closest thing to that in academia is a test. So I over prepare, I go above and beyond. I read things three times, I study and study.”

Scott began his 23-year-long ballet career in San Francisco at 4 years old. At age 9 he joined a professional ballet school, and at 17 he got his first professional gig with the Boston Ballet. In the years that followed Scott danced in Norway with the Norwegian National Ballet, then in Edinburgh, and New York City before settling for six years with Ballet West in Salt Lake City, Utah.

“I was 27 when I stopped five years ago due to injury,” Scott said. “I had a shoulder surgery that I recovered from but I was in so much pain when I was dancing that I couldn’t give it 100 percent anymore so it was no longer art to me. It was an amazingly hard transition.”

After tearing his labrum, a ligament in the shoulder blade, and loosening his rotator cuff, Scott was forced to reevaluate his career path.

“I hadn’t prepared for anything else and once you are done, the industry just kind of throws you away,” he said. “It broke my heart to tell you the truth.  From 4 years old that was everything to me and when it is taken away from these beautiful artists we just start to wither away.”

Before pursuing an academic career Scott was hired as office, tour, and company manager for Ballet West where because of his negotiations with the American Guild of Musical Artists (AGMA) he began to realize his love for practicing law.

“Negotiating with [AGMA] was surprisingly fun, understanding the semantics of contracts and just realizing the power of the pen,” he said. “It’s a change from being a ballet dancer where you really aren’t the painting or the painter, you are the paint. You are told what to do, where to be, and if you do that correctly you create art.”

Scott says he enjoyed the transition from dancer to administrator, as it continued to satisfy his artistic needs.

“As a dancer you prepare for the moments after the curtain goes up, as an administrator you are prepping for all the moments before,” he said. “It is all about the preparation.” 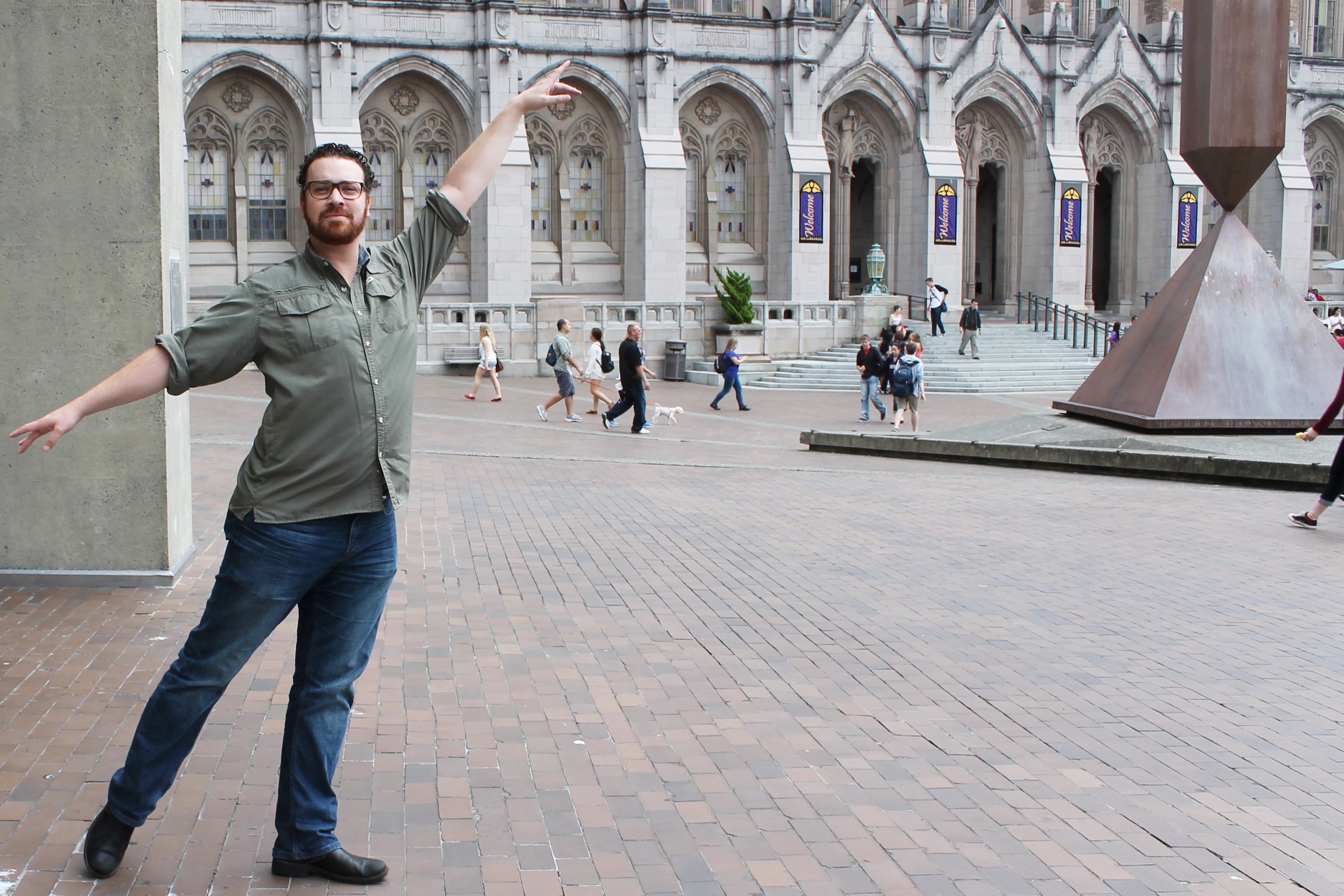 After two years as office, tour, and company manager Scott resigned, moved to Seattle, got his Associate’s degree, then transferred to the UW where he was soon accepted into the Law, Societies, and Justice major.

“I’ve always been interested in law and my duties as company manager made me realize I could do it,” he said. “I find family law altruistic.  In my personal life, family lawyers have had a very positive impact.”

During his parents divorce when he was 13 years old, Scott was influenced by his mother’s positive relationship with her attorney, who helped her to confront and resolve an abusive relationship.

“In our society we have this idea that lawyers are pretty slimy, weasely, and self-serving,” he said. “At such a young age it was nice to have this tangible example of altruistic motives.”

While Scott isn’t currently studying family law, he hopes to pursue it later in law school.

Coming from what Scott refers to as the “purely negative” world of ballet, Scott’s expectations for the academic world were equally harsh. Expecting only negative reinforcement, he was pleasantly surprised by the positivity that defines the LSJ Program.

“I enjoy the professors truly, it can be a very dry subject, emotionless, but they make it accessible and to a point where you can then have your own thoughts about it,” he said. “It has really been eye-opening.”

This quarter Scott is enrolled in Professor Beckett’s LSJ honors course on mass-incarceration and has joined Professor Herbert’s book club held in the Monroe Correctional Complex. Next year he hopes to attend the UW School of Law where he will continue to use the skills he developed as a dancer.

“Having that base and structure of ballet has really allowed me to succeed, it kept me focused,” Scott said. “I had to determine who I was at a young age, it was a little intense but it made me a stronger person.”