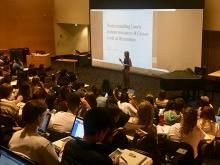 Research by LSJ faculty can serve not only to bring attention to disparities in our legal system, but to manifest in criminal justice reform.  Sometimes, such research can even help make history.

Take, for example, the recent work by LSJ Professor Katherine Beckett, which proved to be consequential in Washington’s landmark death penalty ruling.

On October 11, the Washington State Supreme Court issued a unanimous decision deeming the death penalty unconstitutional “because it is imposed in an arbitrary and racially biased manner.” The majority opinion relied heavily upon the work of Prof. Beckett and Dr. Heather Evans, then a PhD student in Sociology and now a lecturer at UW.

Asked about her reaction to the ruling, Beckett said:  “The word gratifying comes to my mind, but that doesn’t quite capture it. The data were clear and compelling.  In responding to the state’s critiques of our work, we became even more confident in our findings.  It was heartening to see such clear evidence taken seriously by the courts.”

Beckett and Evans analyzed trial reports from 297 aggravated first-degree murder cases in which the defendant was eligible for the death penalty between 1981 and 2014. According to Beckett, “The statistical analysis showed that even after controlling for legally-relevant case characteristics, black defendants were at least four times as likely to be sentenced to death as other similarly-situated defendants.”

The majority opinion, issued by Chief Justice Fairhurst, cited the Beckett and Evans findings, and explained how it influenced their thinking on the matter. In her opinion, Fairhurst said, “Given the evidence before this court and our judicial notice of implicit and overt racial bias against black defendants in this state, we are confident that the association between race and the death penalty is not attributed to random chance.”

Washington joins 19 other states in the abolition of the death penalty. It is only the third to do so citing racial disparities in the imposition of capital punishment, joining Massachusetts and Connecticut. This ruling will commute the sentences of eight current death row inmates to life imprisonment.

Despite the Court reaching a unanimous ruling, four justices signed a concurring opinion arguing that the rarity of the imposition of the death penalty and occurrence of executions in Washington State also make it arbitrary and unconstitutional.

Recognizing how race influences the sentencing phase is a crucial step, and this decision invites greater discussion about the experiences of particular groups with the criminal justice system.

Beckett has done this type of work before.  She worked with the Racial Disparity Project about a decade ago to assess whether the Seattle Police Department enforced drug delivery laws in a racially-disparate matter.  This work ultimately helped in the creation of Law Enforcement Assisted Diversion (LEAD), a nationally-heralded program that provides drug treatment as an alternative to arrest for drug users and small-scale dealers.

This type of work is unsurprisingly fulfilling for Beckett.

“What makes being a researcher meaningful to me is when I can use my research skills to address important issues of the day,” she said, “particularly around mass incarceration and racial disproportionality in the criminal justice system.”