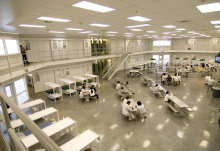 LSJ Professor Angelina Godoy believes that the best learning is learning by doing.

Particularly in the field of human rights, Godoy says that while there is an important place for book learning and lectures, the best learning couples deeper analysis of text and scholarly work with hands-on work in communities that are struggling for their rights.

With this principle in mind, when she knew she would be teaching an LSJ 491 senior seminar Autumn Quarter of 2020, Godoy began brainstorming ways she could incorporate involvement with local organizations into the class curriculum.

Not long after, Washington State Representative Lillian Ortiz-Self contacted the UW Center for Human Rights (UWCHR), inquiring about their research on the Northwest Detention Center in Tacoma, Washington.

More specifically, Representative Ortiz-Self was contemplating drafting a bill (which she has since introduced as House Bill 1090) that would prohibit the use of private prisons in Washington State, including immigration detention centers. She was interested in understanding the extent to which the human rights concerns taking place in this detention center could be addressed without shutting down the facility, but rather by other types of initiatives, such as more rigorous inspections.

When Ortiz-Self asked the UWCHR if they would conduct research on this topic to inform policymakers at the State Legislature, Godoy enlisted LSJ 491 students to help her take on this research project.

Students split up into research groups, and began to tackle the hard questions: why aren’t inspection regimes picking up on these human rights concerns? Why are there gaps in the data? What is the role of state agencies in this equation?

“Students did an excellent job of digging deep into what the inspection regime looks like, and why it's not getting to the problems that exist at the facility,” Godoy said. “That is work that, to do well, requires a lot of attention to detail.”

To help answer the legal questions, LSJ 491 partnered with the Immigrant Rights Clinic at the UW School of Law. Law students utilized their expertise to examine the extent to which Washington state authorities, such as the Governor’s Office or Tacoma-Pierce County Health Department, could exert a more meaningful regulatory role at the Northwest Detention Center. Through their research, law students came to the conclusion that while these agencies had some jurisdiction, they were choosing to interpret their legal authority in a limited way.

“They could interpret their legal authority in a broader way that would involve them in regulation of that facility. The fact that they haven’t is not because it's prohibited under the law, but really because they lack the political will to do so,” Godoy disclosed.

Godoy says the persistence of these human rights concerns speaks to systemic issues within the Northwest Detention Center as well as a deep reluctance on the part of state authorities to do anything about it.

“There is no evidence to suggest that more inspections would produce a different result,” Godoy stated. “That’s not a credible solution to the problem.”

Godoy spoke to the unique nature of this class. “What I think was special about this opportunity is that the research was, in a way, commissioned by a real world need and then produced for that,” Godoy expressed.

LSJ junior Paloma Vazquez echoed Godoy’s enthusiasm for the end result of their research project. “It was impactful to see our work actually being manifested in a real way,” Vazquez said.
“Whatever we produced obviously had great impact.”

Vazquez says that being from a mixed status household was a propelling force for her in conducting this research. The compassion and solidarity she received from her classmates and Professor Godoy, she says, was crucial in maintaining her emotional well-being while learning about tough topics.

“This is very real for me,” Vazquez expressed. “One thing Angelina did a great job of was demonstrating that you can’t just go all in all the time. You need to be there for yourself as well. This is a long fight.”

“If students are interested in long term work in the field of human rights, it's never too early to get involved. In fact, that involvement shapes your education,” Godoy expressed. “The time is now to begin doing the work.”