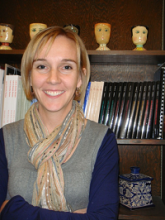 Professor Godoy is certainly well deserving of the award, given that she has demonstrated a long pattern of engaged scholarship and action. She began her career working for Amnesty International as a country specialist on Guatemala shortly after receiving her undergraduate degree from Harvard in 1995. Among many other accomplishments, Godoy helped found the organization Fair Trade Puget Sound, served as co-director of the Central American Network for the Study of Intellectual Property and Access to Medicines, and is currently the Director of the UW Center For Human Rights.

The nomination letter written on Professor Godoy’s behalf – co-authored by Judith Howard, Divisional the Dean of Social Sciences, Steve Herbert, LSJ Director, and Resat Kasaba, Director of the Jackson School of International Studies — noted that Professor Godoy’s passion for social justice developed early. “On her 20th birthday, Professor Godoy learned that her uncle had been murdered in Colombia, a victim of political violence,” the letter noted. “That experience led her to the human rights movement, a transnational coalition for justice that, as she has written, awed and inspired her, and redeemed for her the concept of community.”

The letter further noted that her passion carries into her work in the classroom: “Professor Godoy is deeply committed to educating her students about the importance of public service, thereby ensuring this important work will continue.”

One particularly acute illustration of this work occurred during an Exploration Seminar in Guatemala in 2005: “The class was exposed to the realities of human rights work, hearing personal testimonies from massacre survivors, talking with workers at coffee plantations, meeting with corporate social responsibility officers of a mining company and from indigenous leaders who opposed the mine due to environmental impacts.”

Lara Iglitzin, Executive Director of the Henry M. Jackson Foundation, made a similar point in her nomination letter. “Her students, with whom we have met after their task forces are complete, are energized, galvanized, well-informed, and ready to challenge the world themselves.”

Iglitzin also added, “This, to me, seems to be what the best of university teaching should accomplish: arm the students with background, research, policy and understanding of complex issues, and then help them gain further knowledge through exposure and practical experience where possible.”

Key leaders from within the Puffin Foundation, a group that has awarded Professor Godoy and the Center of Human Rights numerous grants, said that, “Angelina’s reports on her work and personal contacts she and her students have undertaken in El Salvador are riveting. Her work is well rooted and thought out, advancing the cause of justice and human rights and the educational experience of UW students.“

Peter Jackson, a Board member of the Center for Human Rights said, “No one is more emblematic of scholarship as public service. Human rights, a gray-area discipline, is grounded in the tangible. Angelina’s philosophy holds that scholarship without (good) works is dead.”

Referring to Godoy’s political activism on the behalf of the Center for Human Rights, Jackson said, “It is the only university center for human rights established by an act of legislation in the nation, and it was Angelina’s doing. It is a testament to her willingness to take risks and dedicate an inordinate amount of time to advance the greater good, creating a vital institution that we hope lasts forever.”

If you would like to read more about Professor Godoy’s recent work, you can read the featured article on her new book here.

For his part, LSJ Director Steve Herbert is extraordinarily proud that the public service orientation of the program faculty is gaining wider recognition. “It is one thing for faculty members to stress to students that public service is important,” he said. “It is another thing entirely to actually demonstrate that through one’s own practice. I trust our students recognize the example that Professor Godoy sets, and I suspect they feel inspired to emulate her.”

This article was written by Chase Beauclair.